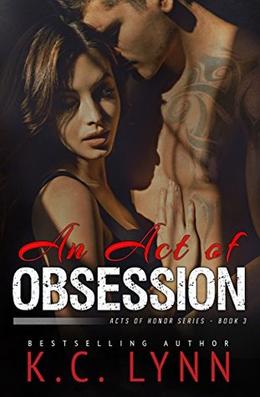 An Act of Obsession (Acts of Honor #3)

She’s beautiful yet scarred beyond repair.

He’s powerful and lethal, in and out of the ring.

One act of kindness brought Sophie Parish far more danger than she could have ever imagined. Now she’s on the run, leaving behind her family and the only dream she’s ever had.

Retired EFC fighter Kolan Slade’s life has been one endless battle after another. He has a dark past with an even darker desire—the only one he’s ever known.

Until he meets Sophie.

Intrigued by her raw beauty and the secrets she’s trying to hide, Kolan craves to know who she is and what she’s running from.

Protecting her becomes his obsession and he’ll sacrifice it all to save her. But in the end her love will have him questioning himself and everything he thought he knew.

This is book three in the Acts Of Honor series, the spin-off series to Men Of Honor. Kolan and Sophie’s story is told in dual POV, has an HEA with no cliffhanger, and can be read as a standalone. However, I recommend reading prior books in both series, as characters play recurring roles throughout.

Warning: Due to mature subject matter, such as explicit sexual situations and coarse language, this story is not suitable for anyone under the age of 18.
more
Bookmark Rate Book
Amazon Other stores

The 'Acts of Honor' series

Similar books to 'An Act of Obsession'

Buy 'An Act of Obsession' from the following stores: