A Selfless Man (Men of Manhattan #6) 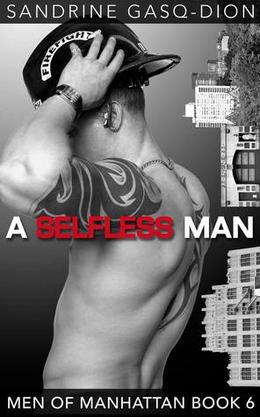 Ryan Carter always hoped his life would turn around for the better. He has a job that he loves, and another one that he hates. Becoming a rent boy was never his life plan, but circumstances forced his hand. When his life falls apart, hunky firefighter Michael Callahan comes to his rescue. Ryan knows better than to believe someone as wonderful as Michael would ever want to be with someone who sells his body. But spending time with Michael gives Ryan something he's never had before.

For months, New York firefighter Michael Callahan has been thinking about the hot guy he rescued while working crowd control during a robbery standoff. His brother is very happy dating a man, and Michael wonders if he's finally ready for a relationship of his own. An apartment fire brings him face to face with the young man who's been haunting him for months. Their friendship starts strong, but will Ryan's alternate life put out the flicker before it has a chance to flame?
Can Michael convince Ryan that he wants him no matter who he is? Or will the relationship turn to ash before it even begins?
more
Amazon Other stores
Bookmark  Rate:

'A Selfless Man' is tagged as:

The 'Men of Manhattan' series

Similar books to 'A Selfless Man'

Buy 'A Selfless Man' from the following stores: