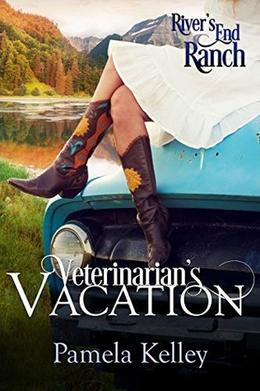 Discover River's End Ranch...a gorgeous working ranch and resort in Riston, Idaho. It's run by the Weston family, which includes six siblings, a cousin and parents that are driving cross-country in an RV--semi-retired, but still pulling strings from the road. This is a fun, sweet contemporary romance series with an interesting cast of memorable characters.

Jess Weston is about to graduate from veterinarian school when Jake, her cousin Wade's best friend from high school, comes back to town for a two-week vacation and Wade puts him in the cottage next to hers. It was bad enough that she'd had an embarrassing and totally unrequited crush on Jake when she was younger, but now he was even more attractive, and he might be sticking around for longer than two weeks....as her new boss, which puts him firmly off limits for anything more than friendship.

Jake Wheldon is also a veterinarian and has come home to Riston to be closer to his father who lives in town with his snobby wife, Claire. Jake wants to put down roots, to build something and jumps on an opportunity to buy the vet clinic where Jess is an intern. He hasn't seen her since she was thirteen. She was cute then but much too young for an eighteen-year-old high school senior. She's all grown up now, but as his employee, she remains out of reach.


The first five books of the series will be released weekly according to this schedule:

'Veterinarian's Vacation' is tagged as: