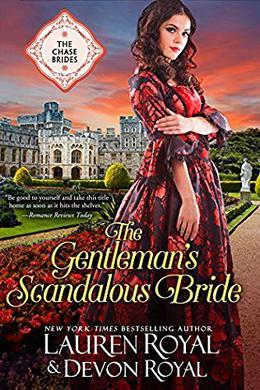 “The Gentleman’s Scandalous Bride” is the SWEET & CLEAN ROMANCE edition of “Rose” by Lauren Royal.
From a New York Times bestselling author and her daughter!

England, 1677 : The last of three sisters to marry, Lady Rose Ashcroft is determined to land a wealthy, titled husband—a marquess perhaps, or even a duke. Having had her heart broken in the past, she's decided the key to enticing a man lies in hiding her intelligence and academic interests while flaunting her more feminine qualities. Matchmaking mother in tow and strategy firmly in place, Rose heads off to Charles II's court to find love...

And runs smack dab into Christopher "Kit" Martyn, the one man who could ruin all her plans. Kit is a dashing, successful commoner with his sights set on landing the post of official Royal Architect—and he's the only man Rose feels she can honestly talk to about anything. Kit knows the true Rose, and he wants her, but she thinks of him as a family friend. Can he convince her that a title is unimportant compared to the love he knows they're destined to share?

PLEASE NOTE: This book is the SWEET & CLEAN version of “Rose” by Lauren Royal. If you’d prefer to read the original book, which includes steamy love scenes and stronger language, look for “Rose.”

• Humorous historical romance
• A complete, standalone story—no cliffhangers, no need to have read other books in the series
• A full-length novel (equal to about 400 printed book pages)
• PG-rated: Kisses only, no love scenes!

This e-book includes Bonus Material: an Author's Note, a preview of Lauren and Devon’s next book, and a link to an online contest where you can enter to win a piece of jewelry.

While THE GENTLEMAN’S SCANDALOUS BRIDE can be read as a stand-alone novel, many readers enjoy reading it as part of a series. All of Lauren & Devon’s books feature Chase family members. Should you wish to read them in chronological order, this is the sequence:

LAUREN ROYAL decided to become a writer in the third grade, after winning a “Why My Mother is the Greatest” essay contest. Now she’s a New York Times and USA Today bestselling author of humorous historical romance novels. Lauren lives in Southern California with her family and their constantly shedding cat. She still thinks her mother is the greatest.

DEVON ROYAL is the daughter of romance novelist Lauren Royal. After attending film school, she wrote an award-winning TV comedy pilot and spent several years working in digital video production before turning her focus to fiction writing. Devon lives in Southern California with her husband. She also thinks her mother is the greatest.

'The Gentleman's Scandalous Bride' is tagged as:

Buy 'The Gentleman's Scandalous Bride' from the following stores: