Touch of a Highlander (Arch Through Time #2) 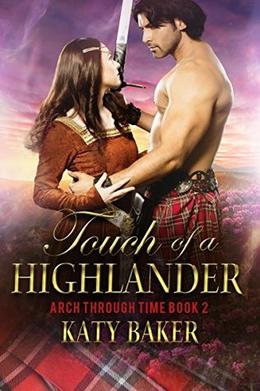 Gretchen Matthews is a woman on a mission.

Haunted by the disappearance of her friend, Gretchen is determined to discover the truth. So when a strange old woman gives her a cryptic clue to her friend’s whereabouts, Gretchen packs her bags and heads to Scotland.

But things aren’t as simple as she’d hoped. When she steps through a stone archway on a wind-swept hillside she realizes that to find her friend she must travel not only thousands of miles but hundreds of years into the past – and avert a clan war in the process.

Lost in a world of passion and peril, Gretchen is rescued by Ewan Murray, a brave Scottish warrior. He just might hold the key to everything: finding her friend, averting a war – and unlocking Gretchen’s heart.

But Ewan Murray has demons of his own. Returning to his clan after years of exile, he is eager to build a new life for himself. But with enemies all around, Ewan isn’t sure who to trust – including Gretchen. Does the dark-haired beauty hold the key to his future? Or the destruction of his clan?

And can they figure it out in time to avert a war that will destroy all they hold dear?

Touch of a Highlander is the second book in the Arch Through Time series. Each book can be read as a standalone novel.
Dreams of a Highlander, Book 1, is available now!
more
Amazon Other stores
Bookmark  Rate:

'Touch of a Highlander' is tagged as:

The 'Arch Through Time' series

Similar books to 'Touch of a Highlander'

All books by Katy Baker  ❯

Buy 'Touch of a Highlander' from the following stores: