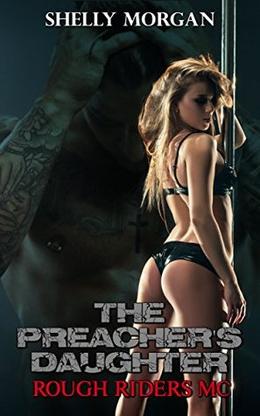 Angelica Hock is the preacher’s daughter, and that’s all she’s ever been known as.

Her life has already been planned out for her, right down to what college she’ll attend and what her major will be. Which is inconsequential, since she’s expected to marry a man of her parents’ choosing, bear his children, and be a stay-at-home mother.

A trip to the wrong side of town puts her in the middle of a living nightmare when she’s saved by a dark knight. He makes her feel things she never dreamed possible. But reality slaps her in the face when she learns he’s no different from anyone else.

Taking matters into her own hands, she buys a one-way ticket to Reno—new town, new friends, new life. She even decides to change her name.

Torq is a member of the Rough Riders and not a man to mess with.

Having a drink at Bottoms Up—a strip club his MC owns—he sees Angel dance for the first time. Only she turns out to be the girl he saved from being sold as a sex slave; she’s the preacher’s kid. But she’s not like he remembered, which only makes him want her more.

When someone comes into town with a grudge, Angel will be put in the line of fire, because everyone knows the best way to hurt your enemy is to hurt the person they care about the most.

He’s already saved her once, but he’d gladly go to hell and back to do it again.

*** WARNING: Book does end with a cliffhanger. ***
more
Amazon Other stores
Bookmark  Rate:

'The Preacher's Daughter' is tagged as:

Similar books to 'The Preacher's Daughter'

All books by Shelly Morgan  ❯

Buy 'The Preacher's Daughter' from the following stores: