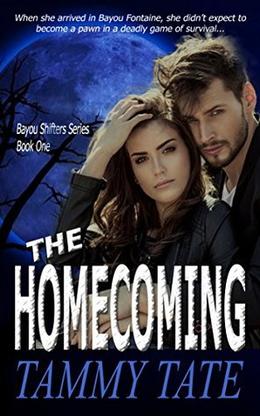 Sydney is half human, half wolf, and has fallen in love with Kyle, a full-fledged shifter who for the last six months has been appearing in her dreams.

The next full moon, Sydney makes her first shift from human to wolf. The transformation won’t be easy. Thanks to her human genes, it could leave her disfigured. Or, worse. Dead.

Edward knows he can't rush Sydney to the hospital if something goes terribly wrong, so he sends his only daughter to live with his late wife’s wolf clan deep in Louisiana’s alligator infested bayou. Despite holding Edward responsible for her sister’s death, Susan agrees to help.

Sydney learns Kyle is in Bayou Fontaine. But, for the sake of the pack, the council has already chosen Emily, as his mate. The relentless she-wolf will stop at nothing to claim what is rightfully hers and teams up with Kyle’s twin brother, Justin, who’s hell bent on revenge.

The clock is ticking...
more
Amazon Other stores
Bookmark  Rate:

'The Homecoming' is tagged as:

Similar books to 'The Homecoming'

Buy 'The Homecoming' from the following stores: