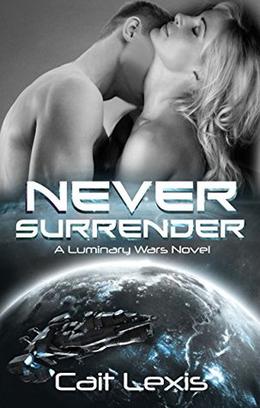 She’s the galaxy’s most wanted. And only a space pirate dares to take action.

Lo Deveron is on the run after her fiancé, a core world senator, was found murdered in their apartment. With an unknown threat chasing her, the normal sheltered life she knew is suddenly turned into a nightmare. While attempting to escape law enforcement, she lands straight onto the lap of a dangerous pirate, who agrees to help her for a price.

Pirate captain Lenk might be bold and cocky as he leads his crew against deadly enemies, but he has no idea what to do with a lady. He knows his ship can hold more danger than protection for someone like Lo. Yet when she has no one else to turn to, he doesn’t hesitate to face off against her pursuers and risks everything to protect her.

With a price on her head, everyone wants a piece of her, including mercenaries and bounty hunters, as they hunt her across star systems and set traps to capture her. When Lo discovers the shocking reason behind the relentless manhunt, she realizes there’s only one man she can trust.

'Never Surrender' is tagged as:

All books by Cait Lexis  ❯