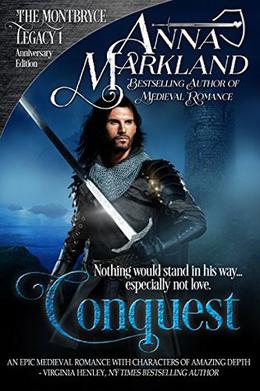 Celebrate the tenth anniversary of the inception of this enthralling story, chronicling the Norman invasion of England in 1066AD, the patriotic Welsh rebellion against it and the impact on the defeated and humiliated Saxons.
Conquest is the combination of two of Ms. Markland’s epic tales, Conquering Passion and Defiant Passion, with added scenes and new plot twists.
Conquest covers a span of over ten years and is rich in details of 11th century England, Scotland and Wales. Book One of the Montbryce Legacy (Anniversary Edition) introduces the three Montbryce brothers, Rambaud (Ram), Antoine and Hugh, sons of a noble Norman family with a long and illustrious military history.
Ram de Montbryce is an ambitious warrior, greedy for glory and power in the service of his friend and duke, William the Conqueror. His heroism at the Battle of Hastings helps secure a Norman victory. Nothing can stand in the way of his ambition, especially not love. He recognizes he has an obligation to marry, but believes the woman his father has chosen for him is unsuitable.
Mabelle de Valtesse has spent years wandering through Normandy with her exiled father. When his lands are finally restored to him and freedom is within her grasp, her father betroths her to Ram de Montbryce.
Follow Ram and Mabelle’s journey through the labyrinth of dangers in the aftermath of the Norman Conquest of England. Granted an earldom in the Welsh Marches as a reward for his bravery during the Battle of Hastings, Ram is expected to quell rebellious Welsh patriots, led by Rhodri ap Owain.
Mabelle, a strong heroine, is more than a match for her warrior hero. Passion quickly flares between them, but both are reluctant to admit their love. Ram demands obedience in a wife. Can he find love with the wilful refugee brought to his bed in an arranged marriage?
Only through trials and tragedy do they finally realize that they can no longer deny what their hearts have always known—love conquers all.
But will the same hold true for Rhodri, or is he fated to live a lonely life fighting against a powerful enemy?
Relive turbulent times through the eyes of the conquerors and the conquered.
Lovers of medieval romance and British history during the time of King William the Conqueror will enjoy this intimate story of passion, betrayal, ambition, vengeance, and of course love.
more
Amazon Other stores
Bookmark  Rate:

'Conquest' is tagged as:

All books by Anna Markland  ❯

Buy 'Conquest' from the following stores: