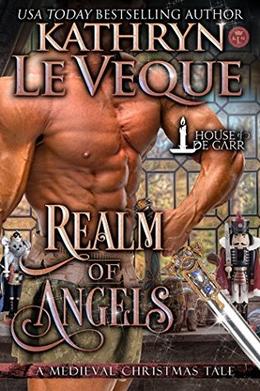 When a noble knight makes a bad decision, it costs him more than his honor.

It costs him his heart.

Welcome to the novella based on E.T.A. Hoffmann's story, 'The Nutcracker and The Mouse King'. Rhogan de Garr is a proud and noble knight from a great family and he has always been fond of Juliana de Nerra (SHIELD OF KRONOS). In fact, he hopes to court her. But, in a weak moment, the lure of wealth and treasure is stronger than his love for her.

When Juliana learns that Rhogan has run off with a German princess, she mourns the loss of the only man she's ever loved, refusing to entertain any other suitors. Four long years after Rhogan's departure, she still refuses to allow her parents to marry her to another. It is her intention to remain a spinster, for if she cannot have Rhogan, then there is no point in trying to find happiness.

True love only exists in the Realm of Angels.

(Note: This is an extended epilogue for VESTIGES OF VALOR and SHEILD OF KRONOS, but it is a complete story, no cliff-hangers, and a HEA. Originally published as part of The Nutcracker Reimagined Christmas Collection 2017. Enjoy!)
more
Amazon Other stores
Bookmark  Rate:

'Realm of Angels' is tagged as:

Similar books to 'Realm of Angels'

Buy 'Realm of Angels' from the following stores: