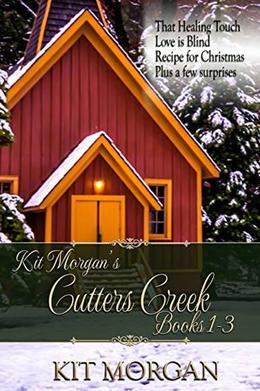 Enjoy this compilation of the first three Cutter's Creek books written by Kit Morgan. Read back to back they become a delightful, fun romp. Add in stories to add to the over-all book bundle and they're even more fun! Enjoy reading these sweet, clean and wholesome western historical romances of Kit's!

That Healing Touch: Jack Carlson spied for the union army for four, long years and what did he get for his trouble? Blindness. Battered by the war and lost without his sight, he seeks refuge in Cutter’s Creek, Montana. There he hopes to heal his bitter heart. But he’s going to need a lot more help than what he can come up with. His cousin, the local preacher, thinks so too and sends off for a mail-order bride for him, praying a wife will do the trick.

Love is Blind: Lucius Judrow was good at his job, maybe too good. Hired by Jack Carlson of Cutter’s Creek to track down and retrieve his sister Emma, Lucius got more than he bargained for. The free-spirited Emma wasn’t what he expected, nor was the family she’d taken refuge with.

Recipe for Christmas: Eldon Judrow searched for his brother Lucius for years, during which, he just happen to strike it rich. Imagine Lucius’s surprise when Eldon shows up in Cutter’s Creek! But even though Eldon’s bank account makes it appear he has everything a man could want, his brother has something far more precious. A wife. Can Eldon find the same happiness? After all, the pickings in Cutter’s Creek aren’t just slim, they’re practically non-existent!

'Kit Morgan's Cutter's Creek Plus a Few Surprises ...' is tagged as:

Buy 'Kit Morgan's Cutter's Creek Plus a Few Surprises ...' from the following stores: