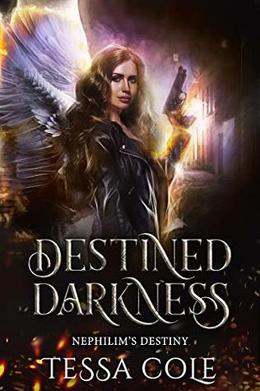 They’ll do anything to protect her... as long as they never learn her secret.

I’m Officer Essie Shaw, and I shouldn’t exist. If anyone finds out their friendly neighborhood beat cop is a nephilim — public enemy number one — I’ll be imprisoned. Or worse, dissected. I survive by keeping my head down and my barely-there magic under wraps.

But when I lose a fight with a strange, smoke-like wraith, I’m confronted with my worst nightmare. A Joined Parliament Team of Agents — supernatural monster hunters who’d arrest me in a heartbeat if they knew the truth — a no-nonsense angel whose mere gaze captures my soul, a vampire with a breathtaking bite, an incubus with enticing hellfire in his eyes, and, worst of all, my smoldering-hot ex-partner, turned werewolf thanks to my rookie mistake.

This wraith has been picking off veterans of the recently won war against the archangel Michael, and the bodies are piling up. My unwanted connection to it, along with the team’s skills, could be the key to trapping it in magical stasis. Question is, am I strong enough to serve as bait, while keeping the secret that could brand me their enemy?

Destined Darkness is the first book in the Nephilim’s Destiny series, an action-packed full-length paranormal romance with four irresistible guys and a kick-ass heroine who doesn’t have to choose.
more
Amazon Other stores
Bookmark  Rate:

'Destined Darkness' is tagged as:

All books by Tessa Cole  ❯