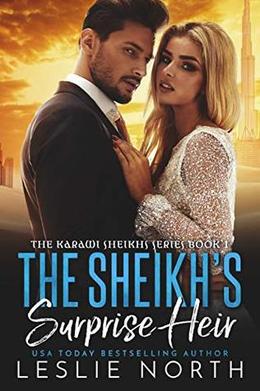 Every time Natalie looks at her beautiful daughter, Iris, she can’t help but think about the passionate night she spent with a prince—and for good reason: Prince Iman Karawi is Iris’s father. Though Natalie longed to tell Iman about their daughter, unknown to her, Iman’s manipulative uncle hid the truth. Even as she goes on with her life, caring for her daughter and her dying mother, she cannot get thoughts of Iman out of her mind. Now, six years later, a chance meeting brings back all the feelings Natalie’s tried to forget. How could one-night haunt her after all this time? It’s clear Iman wants to continue where they left off, and it’s just as clear to Natalie that he might break her heart again. Especially if he ever finds out that little Iris is his.

For Iman, Natalie was always more than a one-night stand. He never understood why she left so abruptly, and even years later during a chance meeting, he’s still drawn to the blonde beauty in a way he can’t explain. Despite being promised to another by his parents, Iman can’t suppress his excitement—or desire—at seeing her again. But this time, Iman is not ready to say good-bye. He makes her a job offer she cannot refuse, and as he and Natalie spend more time together, it’s clear to Iman he cannot marry his fiancé, not when the love he feels for Natalie burns so deep.

As the past threatens to destroy their blossoming romance, it might be too late for either of them to find the happily ever after that has always been just out of reach.
more
Amazon Other stores
Bookmark  Rate:

'The Sheikh's Surprise Heir' is tagged as:

The 'The Karawi Sheikhs' series

All books by Leslie North  ❯

Buy 'The Sheikh's Surprise Heir' from the following stores: