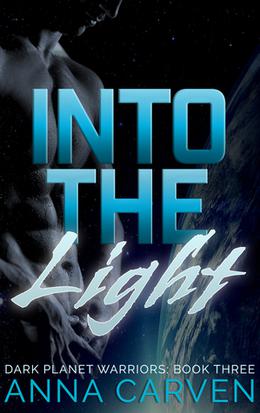 Into the Light (Dark Planet Warriors #3)

Abbey
When your mate is a Kordolian General who's betrayed the most vicious Empire in the Universe, things tend to get a little heavy from time to time. For the last six months, Tarak's had to divide his time between Earth and space, dealing with various... problems.
But he's home now, and he tells me he's not going anywhere.
That's good news, because our baby's on the way, and I'm dying to get out of this boring, stifling limbo they call the Diplomatic Zone.

Tarak
Now that Earth is surrounded by my warships and the Kordolian Empire has been held at bay, I can give my full, undivided attention to my mate.
Pregnancy has made Abbey even more beautiful, and I am in awe of the growing life she carries inside her.
But I must be ever-vigilant, because the shadow of the Empire lingers, and I must protect what is mine, at all costs.

Warning: This book is a science-fiction alien pregnancy romance. It contains swearing, violence, sensual (pregnant) sex scenes and silver aliens with fangs. It's definitely recommended for readers aged 18 and over.

Into the Light is Book Three in the Dark Planet Warriors Series. It will make more sense if you've read the other books first, although that's probably not absolutely essential.
more
Bookmark Rate Book
Amazon Other stores

Similar books to 'Into the Light'

Buy 'Into the Light' from the following stores: