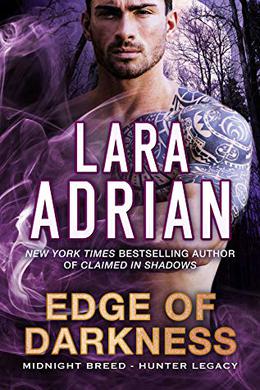 As a survivor of the horrific Hunter program, Breed vampire and former assassin Knox is a solitary man, closed off to the pain of love—and loss. A loner by choice, Knox deals in death and dark justice, expecting nothing in return. Until one snowy night he drifts into a remote town in northern Maine, where a determined beauty enlists his lethal assistance, tempting not only his hunger, but his wounded heart as well.

Lenora Calhoun has lived in tiny Parrish Falls all her life. Owner of the local diner that’s been in her family for generations, Leni’s as stalwart and stubborn as the tall pines that surround her. That unshakable resolve doesn’t sit well with everyone, least of all the most powerful family in the logging town. Leni’s been the target of their animosity for years, but with their escalating threats now putting an innocent child’s safety at risk, she takes a desperate chance on a dangerous stranger—a man who is something more than human. Knox’s deadly skills and turbulent gaze should be warning enough for Leni to guard her heart, yet she cannot deny the yearning he stirs in her blood. For the merciless Breed male is the only man she can trust in a town full of secrets, and where taking a stand could rip away everything she holds dear.

While this novel is Book 3 in the Hunter Legacy series, each story in this Midnight Breed spin-off series can be read as a complete standalone with HEA and no cliffhangers.
more
Amazon Other stores
Bookmark  Rate:

'Edge of Darkness' is tagged as:

Similar books to 'Edge of Darkness'

Buy 'Edge of Darkness' from the following stores: