Hate Thy Neighbor (The Kerrigans: A Texas Dynasty #4) 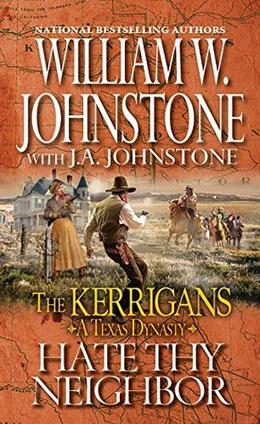 THE GREATEST WESTERN WRITERS OF THE 21ST CENTURY

They risked their lives to make a home in the heart of West Texas. Now the Kerrigan family must face the deadliest challenges of the land they love—and the evil that men do.

After a two-year drought, the Kerrigan ranch is dry as a bone and as dusty as a honky-tonk bible. On the brink of ruin, Kate Kerrigan hires the rainmaker Professor Somerset Lazarus, who promises salvation—in the form of a deluge. Kate is desperate enough to try anything. But when four angry gunmen show up, ready to lynch the phony rainmaker for swindling them out of their money, the Kerrigans have to choose sides fast—before the bullets start to fly. It doesn’t take a divining rod to figure out that these unsatisfied customers want more than a refund. They have their sites set on the Kerrigan ranch. And it’s just a matter of time until it’s raining water or raining bullets. Either way, there will be blood . . .

'Hate Thy Neighbor' is tagged as:

The 'The Kerrigans: A Texas Dynasty' series

Similar books to 'Hate Thy Neighbor'

Buy 'Hate Thy Neighbor' from the following stores: