Her Only Hope (Brides of Hope Hollow #3) 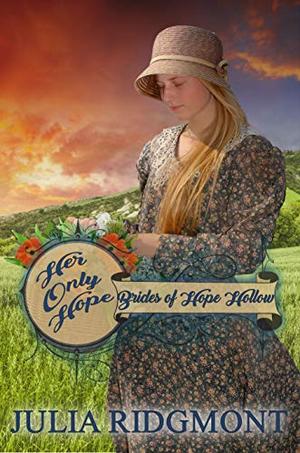 Running from her father's murderer might keep her safe for a while, but it won't protect her heart.

Alexandra Carter was supposed to marry Jacob Mahoney. At least, that was what her younger self believed when he worked in her father's blacksmith shop years ago. At that impressionable age, she could have watched his well-muscled arms perform such manly work for hours. But then he suddenly disappeared and she became her father's assistant, discovering in the process that females could do the work just as well, if not better.

Then, one fateful day, when everything falls apart, the only way Alexandra can escape immediate danger is to disguise herself as a young man—and find Jake. But where did he go? And what will she tell him when she finds him? If he knows that someone is after her, and possibly him, too, will he be willing to put his life on the line?

Jake Mahoney thinks he's found his niche in the small town of Hope Hollow, Oregon. As the town's blacksmith, folks trust him to perform quality work in a timely manner—and he's able to deliver. That is, until a skating accident leaves him incapacitated. When a young apprentice offers his assistance, it seems that fate is smiling on him. But why does he seem so familiar? And what is he hiding? By the time he discovers the key to unlock that mystery, it might be too late.

Can Jake and Alexandra rekindle their friendship and forge a love that will never be broken?

Book 3 in the popular series, Brides of Hope Hollow, shows the power of faith and hope when love in disguise eventually sees the light of day.
more
Amazon Other stores
Bookmark  Rate:

'Her Only Hope' is tagged as:

The 'Brides of Hope Hollow' series

Similar books to 'Her Only Hope'

Buy 'Her Only Hope' from the following stores: