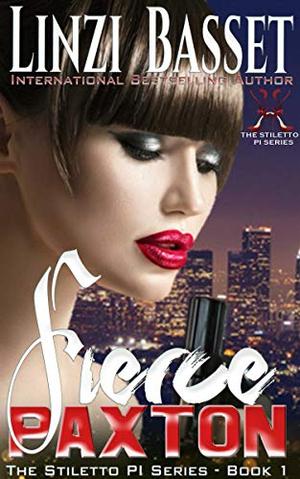 The Stiletto PI Series is about the four women of The Red Reign PI Agency: Paxton, Jordan, Knox, and Kezlin. All four are seasoned ex-military combatants. They’re badass, sassy and measure up to any man worth his salt, especially when challenged by the four men of The Cobra Black Ops group.

In FIERCE PAXTON, Book 1, we meet Paxton Lee and Jared Bates.
My name is Paxton Lee, an educated forty-two-year-old widow. But don’t let my age fool you. I can give any twenty-five-year-old a run for her money. I have one weakness... stiletto heels.

The Red Reign PI Agency is my baby and I take pride in our successes. We’re batting a 1000, but here’s the rub. Lately, the most irritating Black Ops Commander, has been sticking his nose where it doesn’t belong.

I was one of three women who completed Army Ranger Training and deployed with the 75th Ranger Regiment in Iraq. All modesty aside, I am one badass Ranger. You should see the fruit salad on my left breast. I spent 165 days under fire so, if you’re wondering, I can measure dicks with the best of them and yet, this delusional man insists I need his protection.

It’s time to set him straight.

My name is Jared Bates. I’m a divorced, forty-eight-year-old man in a thirty-year-old body that women salivate over. No boast. Well, maybe just a bit. If ya got it, flaunt it, is my credo, not that I pay much attention to that. Yeah, I’ve chased a lot of booty. Have had my fair share of it, too. Got lucky on many occasions. Then, there are the ones that have stayed just out of reach, like the boss of the Red Kitties agency. Now, she just triggers the devil inside me.

Anyway, I’m in charge of a covert Black Ops group called, The Cobras. We operate under our own flag and only take the jobs that fit our standards— legal and moral, even though the two aren’t synonymous. Trying to bring down one of the five Mafia families in the U.S. is next to impossible. You cut off the head of one capo di tutti capi and two new ones grow back. These families have histories that go back to the sixteenth century. The Sicilian Cosa Nostra, the Ndrangheta of Calabria and the Camorra of Naples. Ancient, all of them, with an almost inhuman ability to survive.

So, now the Kitties of the Red Reign PI Agency are nosing in on our territory and interfering. Things are getting dangerous, especially since that sassy Miss Lee refuses to back down.

It’s time to set her straight.

EDITOR REVIEW:
Linzi Basset has aced it again. The seasoned raconteur has just penned another ripper. This time, she sucks us in with a female protagonist who pulls no punches when it comes to Love and Warcraft. Get ready to meet a hellion and veteran warrior who will give no quarter but has a heart of gold. It's all in here, splashed with carnality and suspense and peppered with a woman's genius for sarcasm, subtly, and wit. This one is a barnburner with a twist.
NOTE: The book is written in 3rd person. The blurb just sounded more fun in 1st person.
more
Amazon Other stores
Bookmark  Rate:

'Fierce Paxton' is tagged as:

The 'The Stiletto PI' series