The Heir of Thornfield Manor (The Reboot Mystery #4) 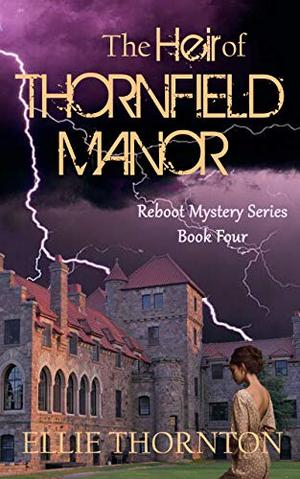 Despite having their minds rebooted for the fourth time, Elizabeth Shea and Patrick Daley are drawn to each other like never before as they face crooked cops, assassins, and a mysterious woman in their midst in this contemporary retelling of Jane Eyre. (Can be read as a standalone.)

Even though Detective Elizabeth Shea worked with the feds on a case a year before, the last thing she expects is to be requested on a murder case in a rural California town called Thornfield. Almost three years after Katelyn Daley was murdered in her home, without any leads, the case went cold — until a week ago when a doctor was killed in the same execution style as her.

Now with new leads, the Feds need Elizabeth to go undercover in Thornfield Manor and watch over its heir, Patrick Daley — the widower and ex-psychic who sometimes consults with the Feds, and with whom she feels an inexplicable bond.

Elizabeth’s job seems pretty straightforward — make sure Daley stays out of trouble until the case is solved. But, the more she learns, the more complicated it becomes. The police work on Katelyn’s murder was shoddy at best with lost evidence, missing witnesses and suspects, and a timeline that doesn’t quite add up. And that doesn’t even include the creepy laughter drifting through the manor’s halls at night or the attempt on Patrick’s life.

If this case keeps going as is, Elizabeth is at risk of losing much more than she ever expected — her heart, her job, and possibly the life of the man she never meant to love.

A Christian suspense and small town romance you won’t want to put down!

“All of Ellie's contemporary reboot books are wonderful and this latest did not disappoint! Clean, suspenseful and fun, I recommend it!” – Katie Miner

Scroll up to buy this book!

'The Heir of Thornfield Manor' is tagged as:

The 'The Reboot Mystery' series

Similar books to 'The Heir of Thornfield Manor'

More books like 'The Heir of Thornfield Manor'   ❯

All books by Ellie Thornton  ❯

Buy 'The Heir of Thornfield Manor' from the following stores: