The Rancher takes his Love at First Sight: a Sweet Marriage of Convenience Western Romance (The Rangers of Purple Heart Ranch #5) 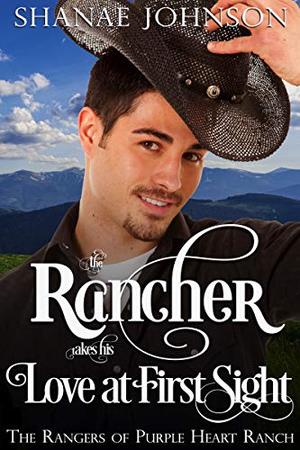 Hypothetically speaking, can an Army Ranger war games strategist and an environmental scientist bent on saving the planet fall in love at first sight?

Romey Capulano knows that marrying Jordan Spinelli is the most logical, expedient, and practical way to save the farm commune she’s lived on her whole life. But when the pragmatic-minded, hydroponic gardner says I do, she’s surprised to find her heart speeding up when he makes his vows, her hands tingling when he slides the diamond on her finger, and her breath quickening as he leans in for the kiss. Succumbing to the notion of love was not apart of her plan, and she’s sure it will ruin the platonic relationship that she and the genius Army Ranger have planned out for themselves.

Jordan Spinelli is certain he’s coming down with something the day of his arranged marriage to Romey. Why else would his blood run hot, his palms sweat, and his heart keep skipping beats? Better he catch an illness than feelings for the level-headed soil scientist. Because falling in love was not apart of their carefully constructed, peer-researched marital agreement.

As the two try to navigate a loveless marriage, unknown forces keep pushing them into each other's arms. Divine acts keep pushing their lips within kissing range. Unspoken desires keep causing their hearts to face the inexplicable truth; the unquantifiable math that all adds up to the obvious. But will Jordan and Romey be able to admit to themselves, and each other, that their platonic vows are a shame because they just might have fallen in love at first sight?

Find out if love can truly heal all wounds in this light-hearted, sweet romance of convenient arrangements that unfold into lasting love. The Rancher takes his Love at First Sight is the fifth in a series of marriage of convenience tales featuring Army Rangers who are felled by the power of strong, undeniable, and a little over the top instalove.
more
Amazon Other stores
Bookmark  Rate:

'The Rancher takes his Love at First Sight: a Sweet Marriage of Convenience Western Romance' is tagged as:

The 'The Rangers of Purple Heart Ranch' series

Similar books to 'The Rancher takes his Love at First Sight: a Sweet Marriage of Convenience Western Romance'

More books like 'The Rancher takes his Love at First Sight: a Sweet Marriage of Convenience Western Romance'   ❯

All books by Shanae Johnson  ❯

Buy 'The Rancher takes his Love at First Sight: a Sweet Marriage of Convenience Western Romance' from the following stores: