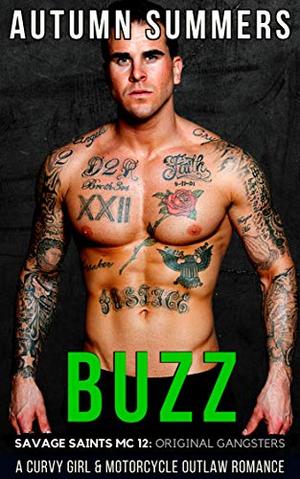 Buzz is the vice-president of the Savage Saints. It used to be a small-time operation, but with his leadership, and brutal efficiency, it has grown to one of the most powerful drug-running MCs in the US in a relatively short amount of time. While he doesn’t let this go to his head, he isn’t exactly prepared for the attention he has drawn to him and his brothers.

Minnie Smith seems like a nice girl, maybe not the smartest but curious to a fault. She has been asking a lot of questions around the clubhouse, especially pestering the VP in particular. Is she just a nosy type or is there more to her than meets the eye. It is certainly hard to see past her looks no matter how much Buzz tries.

Past meets present with the latest and last installment to the Savage Saints biker saga. Don’t miss the heart-stopping conclusion to this action-packed sweet and steamy series.
more
Amazon Other stores
Bookmark  Rate:

'Buzz: A Curvy Girl MC Romance' is tagged as: