More Than A Handful (Alpha and Omega #9) 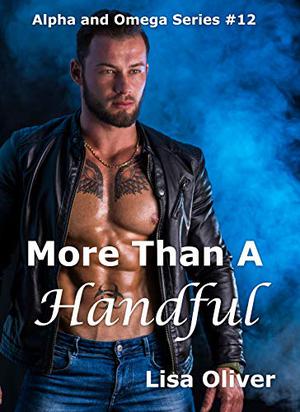 Alpha-heir Karl Jacobs had a life he was proud of. His company was preparing for another major product launch which would add billions to his bank account, his social life was full and varied, and he had a beautiful house situated more than three hours’ drive away from his home pack. Sure, his uncle Bevan, the current alpha of the Blue Moon pack, was pushing women at him in the hopes he’d take a mate and have children, but Karl was busy and able to sidestep most potentially awkward situations. However, at the party for his product launch, things changed drastically, and while Karl could adapt to most things, a male omega wasn’t necessarily on that list.

Tanner Corban’s life was all of his own making. He had a job he did well, even if he didn’t enjoy it, his own home and a lot of friends around him. While there were times when he wished for something more, like a mate of his own, Tanner knew that because he didn’t fit the typical omega mold, it was unlikely he’d ever find his happy ever after. When he spots an alpha at a product launch for some company he’d never heard of and the man walks away, his suspicions were confirmed. Besides, Tanner learned other news that night that had the potential to totally uproot his life.

Being adaptable to change is just one of the hurdles Tanner and Karl have to jump over. Thefts, fraud, and deceit from people usually trusted hits the men hard, both physically and emotionally. When the ultimate threat comes forward, both men are going to have to trust the other to have their backs, or it could mean death for both of them.

This is an Alpha and Omega story with a slight twist. It’s standalone and intended for adults only. #HEA, #MM, #Fated Mates.
more
Amazon Other stores
Bookmark  Rate:

'More Than A Handful' is tagged as:

Similar books to 'More Than A Handful'

Buy 'More Than A Handful' from the following stores: