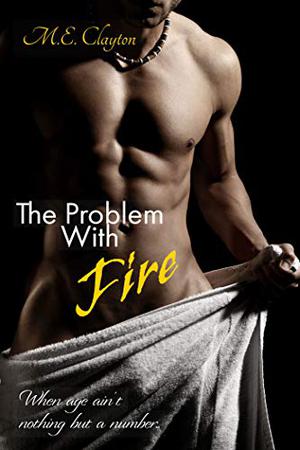 Is age really nothing but a number?

Sayer Hayes sure thinks so. At thirty-five, Sayer is one of Silias County’s best firefighters, and looking at him, you can’t help but think of calendars that may stay on one month all year long, depending on the month.

Single, gorgeous, and determined, Sayer has it bad for his new neighbor. However, for all his calendar-worthy attributes, she barely even looks at him, and Sayer’s patience is running out.

Is age really nothing but a number?

Monroe Stewart doesn’t think so. Knocking on forty’s door, Monroe is one of Silias County’s building inspectors, and looking at her, you’d think she had her life together. She’s a homeowner, for Christ’s sake.

Divorced, tired, and dealing with a teenage daughter and idiot ex-husband, Monroe doesn’t have time to lust over her younger, sexy, and gorgeous neighbor, no matter how many times he washes his car shirtless.

When Sayer overhears Monroe’s ex-husband accuse her of still pining over him, Sayer steps in and lies his ass off, hoping to salvage Monroe’s pride. Monroe lets the lie play out, and that’s all Sayer needs to get his foot in the door.

Between a douchebag ex-husband, a temperamental teenage daughter, a conniving co-worker, a matchmaking best friend, two idiot brothers, a station full of firefighters, a nosey neighbor, and a wedding-planning fireman whose determination rivals Stalin, Sayer and Monroe have their work cut out for them.

Together, they do their best to tip-toe around the landmines called life. But even if it does all blow up in their faces, being blown to bits and pieces never felt so good.
more
Amazon Other stores
Bookmark  Rate:

'The Problem with Fire' is tagged as:

The 'The Problem' series

Similar books to 'The Problem with Fire'

Buy 'The Problem with Fire' from the following stores: