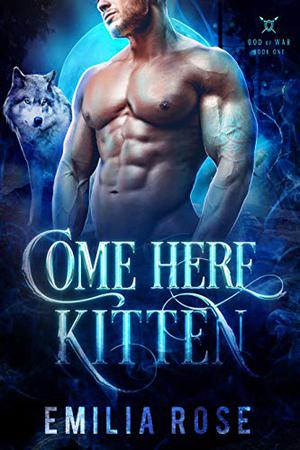 Taming an alpha is never easy—even when you’re his mate.

ARES
Warmonger Alpha Ares promises to kill anyone who has the Malavite Stone—a crystal packed with ungodly powers and healing properties. From slaughtering packs to building himself an empire, he will stop at nothing to find it.

That is until he meets Aurora.

AURORA
Aurora thinks she knows exactly how to destroy such an arrogant alpha: with a good night and some ale spiked with wolfsbane.

But she has three little secrets that could threaten her entire existence…
- She’s knows where the Malavite Stone is.
- A pack of bloodthirsty rogues are trying to kill her.
- And she’s falling for the man she once feared.

Can Aurora fend off the rogues alone? What will Ares do when he finds out Aurora’s secrets? Will their relationship survive their fate? Enter into this steamy, paranormal world today to find out!

'Come Here, Kitten' is tagged as:

The 'God of War' series

All books by Emilia Rose  ❯