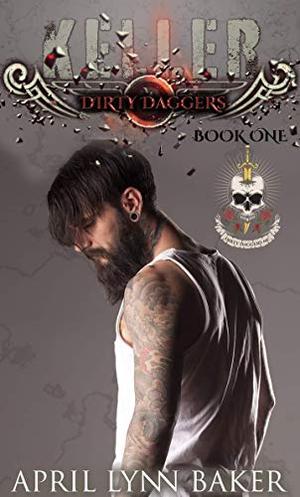 Keller
Me and the club own the streets of Lexington, Kentucky. I ride a very thin line between legal and illegal, I always have. I live by the club's motto, "Ride or Die. Leave no brother behind"
I was raised in the club, my father Bart as the President. The responsibility was passed down to me. Not only that but I have a rat within the club and I will flush him out.
A chance encounter with a beautiful redhead will change my life forever. This woman is sassy and takes no shit. But she hasn't come up against me, Keller Brandt, President of the Dirty Daggers MC. She's hiding secrets and I will find them out. She doesn't know what lengths I will go to protect her, even if they're over that line. No one messes with what's mine.

Gretchen
Running from the the leader of the mob is tiring. I knew to take my sister's advice when she told me he was dangerous. But I was in love. I grew up on the wrong side of the tracks, so stuff like this was normal. But when I witnessed the murder of my sister, I knew I needed to get out. I don't have much time before he finds out I'm gone. Heaven forbid he finds me, because when he does, my life is over as well.
That was until I ran into the most gorgeous guy I have ever seen. Tall, dark and brooding is a recipe for danger. Something about him draws me in and no sooner as I take his help, he is claiming me as his. I'm in deep trouble and I may just fall for the President of the Dirty Daggers MC.
more
Amazon Other stores
Bookmark Rate Book