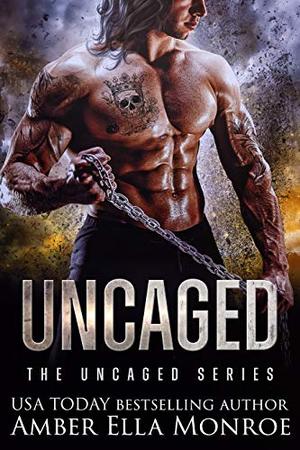 Just the other day, I was bait. Now he says I am his to keep.

I was betrothed to a man I barely knew to right my mother’s wrongs. That is no longer the case. The terms set forth are all null and void.

I’ve been kidnapped from my home by savages—beasts in man-form. We call them The Uncaged—a clan of lawless exiles and raiders known for raising hell to get what they want. When they find out what I’m worth, they’ll never let me go.

The Uncaged are not men. They are Alphas. Created long ago to become super soldiers for the government, they have since turned against humanity. All who know of them stay away. No one crosses this clan. But someone did…

My Alpha captor is bold, feral, and has no time for games. He will get what he wants, even if he has to fight for it. But he’s already made it clear that he’s not giving me up.

I made a promise and now I can’t keep it. I don’t want to anymore, knowing that the only way I will know peace is with an Alpha. Human omegas are extremely rare. Once my heat surges, my alpha won’t be able to control his cravings. Our mate-bond is already forming.

He says he’ll keep me safe, but there are other Alphas in the village watching… and waiting.

He won’t give me back and he won’t let me go. There’s only one thing left to do, and the choice may ignite a war.

The Uncaged Omegaverse takes place on a dystopian Earth and combines paranormal and fantasy elements. Of course, there's a steamy, passionate romance in the mix. The story contains descriptive violence and sex and offensive language. May also include triggers. It also contains a bold, possessive alpha man and a sassy heroine.
more
Amazon Other stores
Bookmark Rate Book

The 'The Uncaged' series