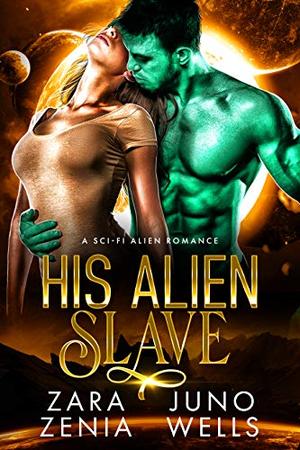 The craziest night in Air Force trainee pilot and rave enthusiast Ellie LaValle’s life starts when police raid the underground party she’s at and she ends up in the back of a paddy wagon being transported to jail. Then there’s a flash of light, she passes out — and she wakes up in a cage on a spaceship!

Horrified Ellie soon discovers that she's being forced into a subservient role as the Omega to an alien Alpha. Worse, she is given injections to imprint mentally and hormonally on whoever buys her. Determined to escape and get revenge, she's in the process of planning to free herself when another spaceship attacks — and she finds herself rescued by space pirates!

His Alien Slave is the third book in the Alien Pirates of Cania series. Each book is a full-length sci-fi romance novel with a happy ending.
more
Amazon Other stores
Bookmark Rate Book

The 'Alien Pirates of Cania' series

Similar books to 'His Alien Slave: A Sci-Fi Alien Romance'

Buy 'His Alien Slave: A Sci-Fi Alien Romance' from the following stores: