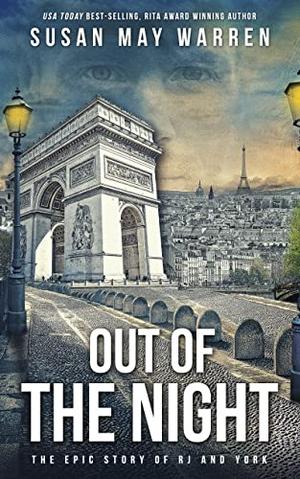 See, this was why York should put a GPS tracker on the woman he loved.
Not that he would, but if he did, then he wouldn’t show up in a town and see said woman trying to do a Spiderman along the face of a building.
And, if York hadn’t simply followed his instincts and taken off across the street she would have left an ugly splat on the sidewalk, probably taking out a planter of geraniums.
As it were—“Gotcha.”
He wasn’t trying to be cute—it was more of a statement of relief, even fury, the spill over of watching her dangle, then slip off the balcony. The fear he wouldn’t reach her in time.
For a second, she just stared at him, also breathing hard, those blue eyes blinking in disbelief. Then, “York?”
“It’s not Superman.”
Then she threw her arms around him, holding so tight she might cut off his breathing. “You’re here.”
“I’m here.” She could probably feel his heart pounding, trying to leave his body.
“How did you find me?”

He’s not looking for trouble…

All former spy and current national security agent York Newhouse wants is to propose to the woman he loves, RJ Marshall. Then they can move to Shelly, Montana, and start the calm, safe life he’s been dreaming of for over a year.

Or maybe RJ simply attracts trouble because she’s just going out for coffee when she spots a wanted, known terrorist standing in the middle of a street in Paris. At least she thinks it’s international criminal Alan Martin, the mastermind behind a plot to kill the president.

But he’s in jail, right?

Wrong. Martin has escaped, and it’s up to RJ—and York—to keep him in their sights until he can be apprehended. But chasing down Martin means following him into the darkness of whatever plot he’s cooked up now.

Will he ever outrun trouble to find his happy ending?

So much for York’s epic proposal. Now, he just wants to escape Europe with their lives.

The romantic trilogy ignites in book of the Epic Story of RJ and York!

Continue the adventure!
Book 1: Out of the Night
Book 2: I Will Find You
Book 3: No Matter the Cost

The 'The Epic Story of RJ and York' series

Similar books to 'Out of the Night'

Buy 'Out of the Night' from the following stores: