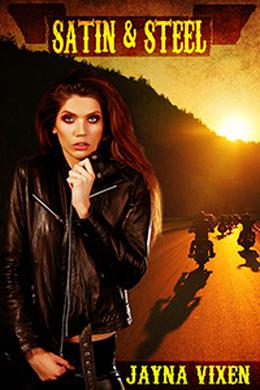 Satin and Steel (Riding The Line #2)

All Rhiannon Blake wanted was to find her little sister, Mickey. The last thing she expected when she walked into the seedy biker bar was to be assaulted. Luckily, Dax Jamison, the tall, muscled, vice president of The Phantoms motorcycle crew rescues her. At first, the innocent college girl clashes with the dominant biker. Then, a slow fire begins to burn between them, culminating in a fiery explosion of sex, drugs, and passion.

At first, Rhiannon is more than a little afraid of the sexy, tattooed biker. He’s arrogant, domineering, and dangerous. When her apartment is ransacked, Dax insists that The Phantoms provide protection for Rhiannon until he can figure out why she is being targeted by a rival crew. When an escaped drug cartel boss joins the mix, things start to get complicated. Loosely based on the hit television show, Sons of Anarchy, this work combines a strong plot with a scorching tale of danger, intrigue and romance.

Jayna Vixen is a popular online erotica author. Satin and Steel is her first published work. Keep an eye out for the sequel, Leather and Sand, due out in 2013.
more
Bookmark Rate Book
Amazon Other stores

The 'Riding The Line' series

Similar books to 'Satin and Steel'

All books by Jayna Vixen  ❯

Buy 'Satin and Steel' from the following stores: