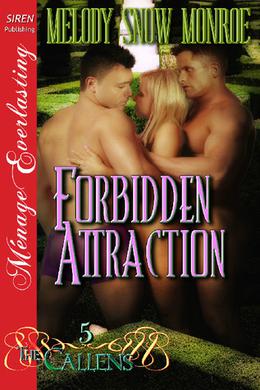 Sexy overachiever Jenny Callen believes in marrying a man who’s her equal. When she meets hunky bar owner Jackson Slade and his super hot monster truck–designer roommate, Taylor Moore, her attraction challenges her belief of what an ambitious, professional man should be.

When she learns Jackson designs lighting and sound for a nationally known band, and she finds out that Taylor is extremely knowledgeable about the stars and speaks three languages, her opinion of them changes. Slowly her belief crumbles that unless a man has a college degree, he isn’t worth her time. She knows they are the right men for her after they sexually fulfill her beyond her wildest dreams.

She then learns that they aren’t who they claim to be, and her world turns upside down. What can the men do to convince her that all three belong in a loving ménage relationship?

'Forbidden Attraction' is tagged as:

The 'The Callens' series