Mail Order Bride: The Storyteller Bride (Heroes and Heroines of the West #3) 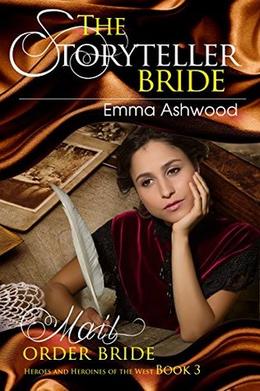 Betty lived in New York with a lazy, cruel and demanding mother who refused to pull her ample weight and demeaned Betty's story-writing skills, despite it being the only income supporting the household and her! When Joan found Betty writing to a rancher out west, with the intention of being a mail order bride, she held her daughter prisoner in the house to keep her from leaving.

Amy longed for her life back in Louisiana. Moving to New York had been a wretched idea, and now she was stuck as a factory worker, living under the roof of a crude and lascivious landlord. She could only see one way out of her current hell, and that was through the Matrimonial Times.

Bill White and Luke Mason had fought in the war together as mere boys, before earning and building up their own successful neighboring ranches in Colorado. Bill felt the time was right for them to find wives to bear them heirs to their legacies. Luke was more than skeptical, but when Bill had successfully proposed to a young lady from back East, Luke took up his offer to continue his ongoing correspondence with another young lady.

Join these four young people, forging a life for themselves in as yet un-navigated territory. Would Joan be proved right, that Betty should have remained in New York and undertaken gainful employ? Will Luke come around to the idea of marriage, and could the lady writing him letters from the East be the one for him, or would he never see past her being any more than Bill's leftovers? Grab a copy and settle in to find out what becomes of Bill, Luke, Amy and Betty as they each go in search of their personal fate.
more
Amazon Other stores
Bookmark  Rate:

'Mail Order Bride: The Storyteller Bride' is tagged as:

The 'Heroes and Heroines of the West' series