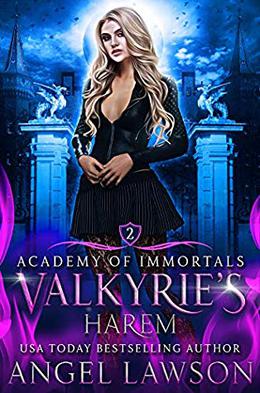 The Academy of Immortals is more than a school, it's the starting point for an epic battle.

Five Sexy Immortal Warriors, One Disgraced Valkyrie, Lucifer's Son, a powerful Vampire Princess, and countless other Royal Immortals are tossed in an Academy prepared to fight in a war manipulated by the Gods.

The big question is…which side are they playing for Good or Evil?

And who can Hildi trust?

Agis, the God of Death?
Marshal, the Knight that betrayed her?
Armin, the loyal Warrior?
Rupert, the transformed Prince?
Miya, the corrupted Samauri?
And who the hell is the Winged Lover that comes to her in the night?

Hildi must find out which of the warriors are her true allies, both on the battlefield and in her bed. Even when she thinks she knows, the gods have other plans for those at the Academy of the Immortals, but even they can’t twist the hands of fate.

Valkyrie's Claim is the second book in the Academy of Immortal series, an adult paranormal romance by best selling author, Angel Lawson.

'Valkyrie's Claim' is tagged as:

The 'Academy of Immortals' series