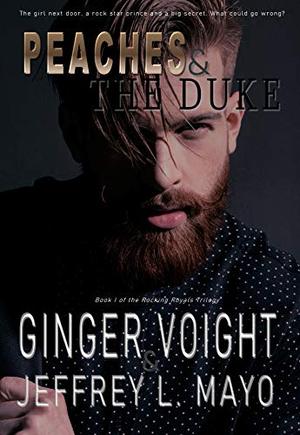 For Peaches McPhee, the chance to interview the Duke of Mayhem is too good an opportunity to miss. This eccentric, elusive royal went rogue to pursue a career as a rock god years before, but he was finally willing to spill the tea in a tell-all memoir that would ensure he’d never sit on a throne.

Only Auggie isn’t the only one keeping secrets. And it’s a secret that is increasingly harder for Peaches to hide the closer he gets to her, literally bringing a fairy tale to life. When the whole world turns its focus on her and those she loves the most, a palace just might be the last place left to hide.

Ginger Voight is back and she expands her Groupieverse across the oceans to foreign lands, where a rock and roll prince might have found an American princess. With the help of her best friend, they bring 40 years of storytelling collaboration to sweep you away to a magical land where fairy tales really do come true, whether you like it or not.

You fell for Vanni, you pined for Drew… but nothing could have prepared you for Auggie.

Say hello to your next book boyfriend.
more
Amazon Other stores
Bookmark  Rate:

'Peaches & the Duke' is tagged as:

The 'The Rocking Royal Trilogy' series

Similar books to 'Peaches & the Duke'

Buy 'Peaches & the Duke' from the following stores: