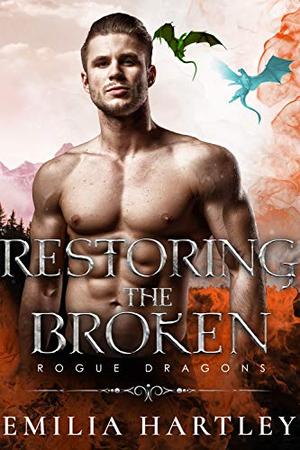 Nobody with any sense goes looking for true love in a bar, but then nobody has ever accused Erik Beck of having any sense, either.

Bree Halstead just knows she and Erik are meant for each other. Someday soon, he’ll tire of taking a different woman home every night and he’ll see her—really see her—and realize how perfect they are together. Her coworkers say not to get involved with the patrons, but Erik is different. Bree is sure of it. Or at least, she’s sure of it until one night when Erik seems sick, and she follows him into a bathroom to help him out. What she finds is an Erik who is totally different from who she has imagined him to be. And after he bites her, her opinion of him isn’t the only thing that changes. As a new world opens before Bree, her daydreams fall away, but the reality that remains is beyond anything she could have imagined. Bree is more convinced than ever that Erik is her destiny. Now all she has to do is get Erik to see that.

Restoring the Broken, the latest from Emilia Hartley, is book three in the steamy Rogue Dragons set.
Though it’s best read in concert with the others, Restoring the Broken is a perfectly complete story in its own right with a delightfully satisfying happily ever after.
more
Amazon Other stores
Bookmark  Rate:

'Restoring the Broken' is tagged as:

Similar books to 'Restoring the Broken'

Buy 'Restoring the Broken' from the following stores: