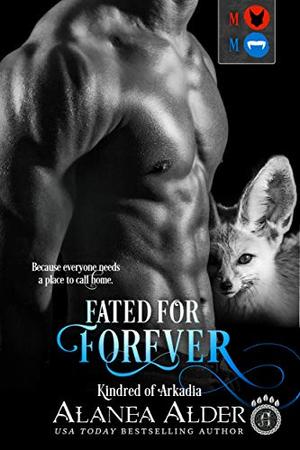 Fated For Forever (Kindred of Arkadia #3)

**Alanea's Note** This is a re-release of a previously published title. It has been re-edited and a bit more content has been added, but nothing that would change the story dramatically. As always thank you for your support! Enjoy!

Ashby Fairfax has always looked for love in the wrong places, his last attempt left him running from an abusive boyfriend. Since coming to Arkadia life has been great, he finally has the family he has always craved. Only one thing is missing, his mate. But how can a small town, fox shifter be mated to a vampire prince?

Prince Gabriel has led his people through the ages and into the 21st century. He is on the verge of losing his soul when he catches the scent of what may be his mate. Once Ashby is confirmed as his, it seems their troubles begin.

Someone is after Ashby. Gabriel’s entire coven rallies around their new prince and for the first time in his existence Gabriel experiences bone numbing fear. Can he find the strength to send Ashby to Arkadia to ensure his safety? And will he be able to eliminate the threat before he loses his reason for living.
more
Bookmark Rate Book
Amazon Other stores

The 'Kindred of Arkadia' series

Similar books to 'Fated For Forever'

Buy 'Fated For Forever' from the following stores: