Risking the Detective (The Bluestocking Scandals #6) 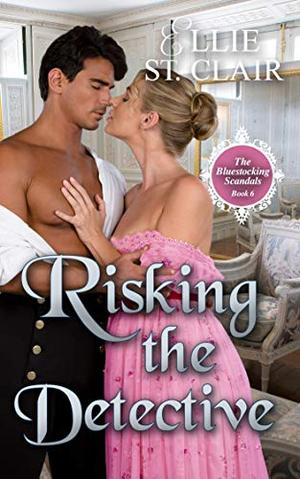 She was swindled, ruined, and left for dead. She is determined to rise -- but she will never fall in love again.

Madeline Castleton was played for a fool, tricked into a sham of a marriage to a masquerading earl who only wanted her fortune. Now she is determined to prove that she is not a naive young woman but capable of running her father’s stone company. He is the one man who still believes in her, and she will make him proud. When he leaves the company in her hands for a sojourn to Bath, however, everything goes wrong, and Madeline is convinced that she is being sabotaged -- though why, she has no idea.

Bow Street detective Drake is determined to find justice for all who have been wronged. Including himself, as for the first time in years, he receives a clue that just might help him solve his parents’ murder years prior -- a murder that was the very reason he became a detective. His work is his friends, his lover, his life, and no one may venture beyond the walls he has carefully erected around himself.

When the broken yet beautiful Miss Castleton approaches Drake for help, he is about to tell her he has no time for such a case. Yet when one misfortune after another befalls Castleton Stone, he begins to realize that she just might be right, and he finds that he cannot say no -- to her offer of payment nor to the woman herself. The more time the two of them spend together, the harder it is for them to deny that “never’ might not be as absolute as they thought.
more
Amazon Other stores
Bookmark Rate Book

The 'The Bluestocking Scandals' series

Similar books to 'Risking the Detective'

Buy 'Risking the Detective' from the following stores: